I don’t know when I graduated into the world of adulthood. I can’t tell you when I began to understand (albeit loosely) aggressive retirement investment plans or the fact that pizza is not always the best idea when it comes to nutritional breakfast options. No, I am not sure when I became one of those muggle-like adults who watch the weather report while biting my lip and wondering how on earth I will make it to work on time the next morning. We grow up, we lose our magic and we get a bit boring. There- I said it, the truth is out. And while there are perks to this world of adulthood (aforementioned possibility of pizza for breakfast among them), there are a lot of moments I look back on wistfully, remembering the untempered joy I found in the most mundane things.

I remember the gleeful excitement that melted my heart every time the word ‘snow day’ was uttered. Oh, how I would run to sit in front of the tv on a school morning after the flakes had fallen the night before, desperately reading through the running scroller on our local news channel that listed every school that was blessed with such an impromptu holiday, holding my breath that the dreaded words ‘snow routes’ were not trailing behind my educational establishment’s name.

I lived for snow days, in fact, one of my all time favorite moments was that year in middle school when I swore at the end of winter break that we needed just one more week. A snow storm granted that wish. To this day I am still a firm believer that wishing hard enough will occasionally make your hopes come true.

I catch my boring adult self staring at the news when there is a whisper of a snow storm on the horizon for a very different reason than I did as a child. Now I’m watching traffic reports, planning and plotting the safest way to work, checking and rechecking how much gas is in the car and asking myself for the fifteenth time why I didn’t buy a big truck when I had the chance. As an adult, snowy flutters have become more a game of logistics and planning. Earlier to rise, listen to the news as I get ready, bundle up until I can’t put my arms down and slowly creep my way to work where I will spend the day staring longingly out the window. As an adult, I don’t get to embark on the joy of snow days. My workplace simply doesn’t really do them- I think we’ve closed perhaps twice in ten years due to inclement weather. And yet, I can never help that little flutter I feel when the first flakes fall, that ease of contented excitement as I sit by the window watching them dance after everyone is safely home. There is a magic to the snow that even my muggle-like adultness cannot quell.

Tonight it snowed- in fact, it is still snowing. It’s windy and white and beautiful as the street lamps glow against the pale blanket that covers my little corner of the world. My nephews are thrilled that they don’t have school tomorrow, my fiancé is ecstatic that even his college courses are cancelled. Politely, they all keep trying to feed my hope and offer ‘you never know, you might get a snow day too.’ I smile, but I know the truth. There is no snow day in my near future.

But that doesn’t mean that I can’t take matters into my own hands and give myself a snow night. All of those joys that I will miss tomorrow- I took tonight. It was late, the world was dark and quiet when I pulled on my boots, fuzzy bathrobe and gloves and ran out into the world. Snow ball fights, snowmen, being chased by the energetic puppy- we ran, we played; we breathed life back into these old bodies of ours (well, they feel old at least). Tonight we forgot about the traffic reports, we didn’t complain about how long the snow plows take, we didn’t grumble because this means we have to get up even earlier tomorrow. No, tonight we remembered what it was like to feel that excitement we felt as kids. We stole a snow night when the world wouldn’t give us a day. The world was peaceful and calm, the quiet only shattered with the peals of our own laughter (sorry neighbors).

Tonight the little girl inside beamed with pride. Perhaps I’m not such a boring adult after all. Never forget to live in the small moments, my friends, choose joy and adventure at every turn. Even if it’s as simple as running into the snow on a cold night when you have to be up early to adult the next morning. Never grow up- not all the way, at least. 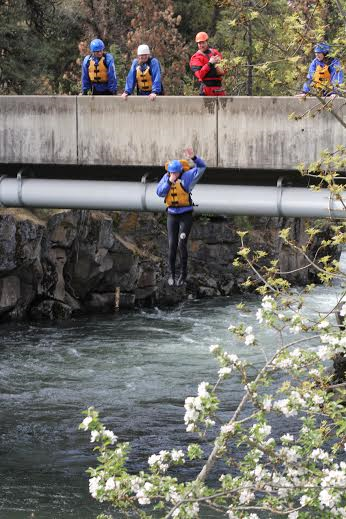 I once jumped off of a bridge because my friends did. (Sorry mom, but I can explain).

It was early spring, and still cold enough to be comfortable in jeans and a sweatshirt, but the sun was out and there was not a drop of rain in sight (a rare treat in the pacific northwest). We were on a white water rafting trip for my friend’s birthday- the first time I had ever done something like that. I was already feeling emboldened because I had not only managed to climb into the raft without any help, but I had also succeeded in staying in it the entire time- didn’t even lose my paddle! So naturally, being dry and warm in my wet suite- it seemed like a perfectly logical idea to take the guide’s offer to climb out of my little raft and scramble up to the cement monstrosity we had just managed to pass under. I even convinced my sister to follow along (again- sorry mom, but big sister peer pressure is a force to be reckoned with).

That was all it took- not even gentle prodding, just the mere mention of this possible adventure, and there I was. Standing on the cement railing, staring down into the dark rushing waters below me as four rafts of college aged students (most of which I didn’t even know) stared up at me with gleaming expectation in their eyes.

Now, let me explain something to you- a vital element to this story. I have two big fears: heights and deep water. And there I was, standing on the edge of a bridge glaring into the eyes of both of them. I remember thinking that after everything, I wouldn’t be able to do it. I would be the only one to turn tail and walk sheepishly back down to the rafts, dry as a bone. I stood there and nearly froze, perched precariously on the railing, staring down into the black water. And then my friends started cheering for me- perhaps they were able to see the slight hint of panic in my face, or they noticed the way my muscles tensed and I stopped breathing.

I knew that all I had to do was take one step off of that ledge- just one, and then there would be no more going back, it would be done. It would be over in a heartbeat. All I had to do was go- and forget the fact that I was stepping out into a void of nothingness. Before I could let my brain catch up and realize what I was doing, my body moved.

You always expect that something crazy and adventurous would go quickly, it would be over in the blink of an eye- I would hit the water, and all would be right in my world once more. Don’t let the lies fool you- that’s not how it happened. Everything was suddenly going in slow motion. I had more than enough time for my brain to catch on to what was happening and berate me for what a stupid decision I had just made. Jumping off of a bridge? Really Katie? A bridge? Isn’t that the exact example all parents use because its just so ludicrous, who in their right mind would do it? I am pretty sure I could have read the entire works of Sherlock Holmes and Don Quixote- and still had time for a spot of tea- all in that endless moment from when my feet left the cement bridge to when the water engulfed me from below. And all I could do was stare at it’s lapping waves as I approached, as the dark expanse of water slowly grew larger. The whole time I was hoping it wouldn’t hurt too bad when I hit, and secretly willing my body to magically learn the art of teleportation and zap me back up onto the bridge.

And then I was in, the water was cold as it enveloped me, slowing me down as I sunk towards the bottom. It was done, I was kicking towards the surface, fleetingly wondering how deep this little water hole really was, and whether Lake Placid style crocodiles could ever hide in a place this far north (fully immersed underwater, it seemed like a plausible possibility- so I kicked harder). I half floated, half swam back to the raft where my friends pulled me in and I looked up to watch the next person take their death defying leap.

I grinned like a Cheshire cat the rest of the way- and I’m actually doing it again now as I relive this memory. There is something about knowing your boundaries and your fears- and tossing them to the wind anyways.

If there is anything that I have learned, it’s that every story we have worth telling starts at the edge of our comfort zones. We just have to be brave enough to take that leap outside of our self-imposed boundaries. I am the first to admit that I forget this fact a lot. But this year I have been fighting for my adventures, the spice that peppers my writing. Some days all I want to do is curl up on my couch and ignore whatever is waiting for me outside that door. But the other thing life has taught me- you never regret opening that door, even if it all turns out disastrously- you have one more memory, one more moment to shape who you will become. I don’t know about you, but I want to be the girl who did something- even if it was as crazy as jumping off of a bridge in spite of your fears. 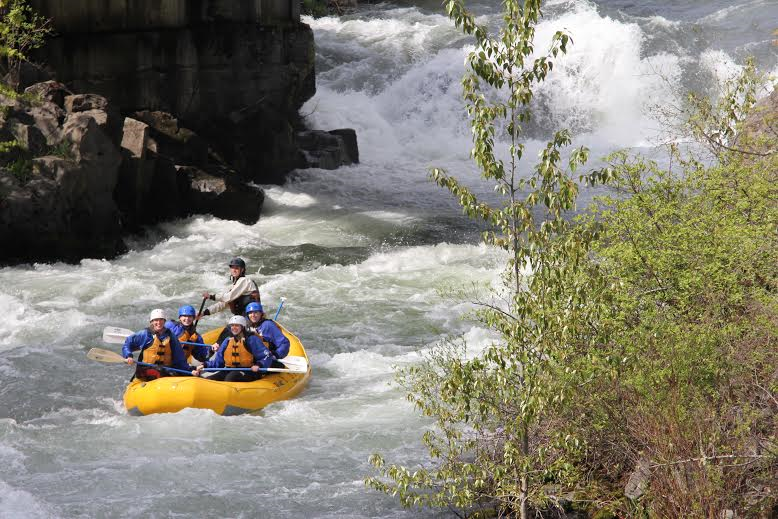