Only in Portland will you find yourself dressed as a banana, running for your life across a bridge as a brigade of gorillas chases you. That was a snapshot of me at 9:30 this morning. Today was the first annual ‘Go Bananas’ fun run, supporting the ‘Free to Smile Foundation.’ The people who put it on were quick to let us know that they had never organized an event like that- but they did an amazing job! We were provided with costumes, food, drinks, coffee mugs, pens, keychains, banana flavored chap sticks, and shirts. The best part: every penny went to the foundation, which provides surgical and dental services to poor and underprivileged children throughout the world. A few local dentists participate and decided to help out a great cause in even more ways.

I haven’t been running in a long time, I will openly admit that I haven’t followed through with my fitness plans the past few months. But when you are presented with the rare opportunity to run through town dressed as a banana- this is not something that you can pass up. I was looking forward to it all week- singing the old ‘go banana’ cheers that I learned when I was knee high to a grasshopper (sorry, I love that saying and never get to use it). That being said, I was very surprised that I was actually able to run the majority of it. Granted, it was only a 5k, but that’s still a lot when the only marathon training you have participated in over the past few months involved Netflix or Hulu and bags of popcorn.

I had a blast, they made us feel so welcome. My mom went with me, and we met a few of my coworkers there. We got there early and were able to spend some time with great people- you would be surprised at how many inappropriate jokes you can come up with when you are dressed as a banana- I’ll spare you my witty puns, but rest assured- they were pure gold. Although, I must admit, it was a bit off-putting to be given a banana as a pre-race treat (and yet it did not stop me from actually eating it). 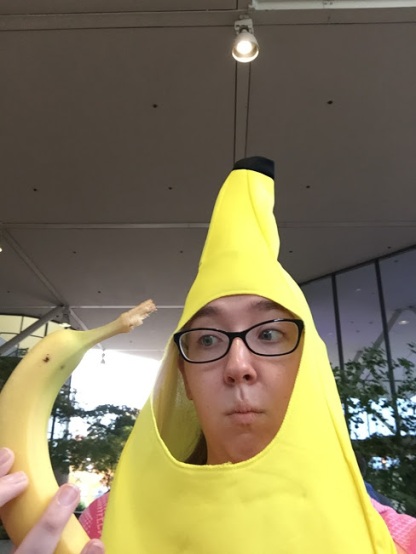 The dentists who were running the event dressed up as our gorillas and ran the entire thing with us- ‘chasing’ us along the trail in full costume as people (and the local fire department) took pictures. It felt good to be passing smiles along to unsuspecting people who were just out and about on their regular business and wandered by when a bunch of bananas were running down the sidewalk from a pack of hungry gorillas. All in all, I would have to say that today was a rather successful day. Another memory made, another race I will be sure to join next year, and a whole new level of motivation to get back out there and start running again. It felt so good to cross that finish line- and knowing that a few boxes of voodoo doughnuts were waiting for us didn’t hurt either.