Last spring I accidentally sent my fiancé’s brother a picture that was meant for my fiancé. Now, before your eyes grow too wide at the thought of it- let me preface this conversation by saying that it wasn’t a ‘bad’ picture or anything like that. It wasn’t something that I would be embarrassed for people to see. I had decided on a whim to get back out and start running again with the dog, and I was proud of myself. So I did what any self respecting 20-something would do, and I took a selfie. 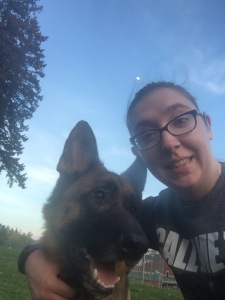 He jokingly responded that at least it wasn’t something more risqué, and in my usual fashion I made a half-serious, half-jesting comment that the reason I was working out was so that I would feel comfortable sending one like that. Now, I have known Josh since I was about fifteen years old- well over ten years, although there were a few in the middle where we didn’t really have anything to do with one another. We’ve always had a lot of the same friends, but we were never particularly close. We’ve always just joked with each other. But this time was different, instead of taking my comment as a half-hearted joke, he looked past to the underlying meaning and made a comment. From there we had an actual conversation: we were both in the process of trying to get ourselves in good shape and find a place where we were comfortable in our own skin. We both had our insecurities, but neither of us really realized them about the other. For once we both understood that we were feeling exactly the same, underneath all of the jokes. At the end of the conversation he said something that struck me: he said that was probably the first time I had ever opened up to him about anything. I was shocked at the truth of it- how was it possible that I had known him over ten years and we had never really had a conversation of substance?

I’ve always been a private person, but I never realized how truly guarded I am. There are only a few people in my life who know me inside and out, who can tell what I’m thinking before I ever say a word. It wasn’t always like this. I used to be such an open book, but somewhere along the way I closed the pages and tied the cover down so no one could see the content. I remember in high school- once people really started talking to me they would always say ‘you are nothing like I expected.’ I used to pride myself on that; I always knew that my reputation didn’t match the girl inside. Outside I was a ‘good girl,’ one of those quiet straight-A types that don’t have any sharp edges. Inside I was tougher, a rocker chick who was vastly misunderstood. As I grew up my different sides started to merge, and now I’d like to think that I am a more well-rounded person.

This conversation bothered me enough that today I am still thinking about it, months later. Mainly because I see how true it is. I’ve always prided myself on being honest; but is there true honesty when you are constantly hiding? I don’t mean to, I guess I just assume that people wont really care what I have to say. I guess after all is said and done, I am still like that little girl who is afraid of rejection. It is easier to be rejected for a public persona when I know that isn’t actually me than it is to be rejected for the person underneath. How many times do I share little anecdotal stories instead of spilling the truth?

If I were to die tomorrow, how many people would know who I really was, and how many people would know the face that I put on in the morning? It’s not that I’m being fake, I am who I am. But I’m not being deep. I’m not sharing all of who I am or what I do. Take my writing for example: it is a huge part of my life, it is my heart and soul, it is the thing that drives me. But I can probably count on one hand the number of people who know that it is even a hobby of mine.

So who am I? And why aren’t I more open? Those are the true questions, and to be honest- I don’t know if I have a complete answer. When you brush past the superficial responses of what I do for a living and what my hobbies are- who is underneath? I’m just a girl who is always trying to be better. I’m a girl who can’t process the world without a pen in her hand. I’m a socially awkward goofball who can dad-joke and nerd talk with the best of them. I’m opinionated, but I don’t like making waves unless I know I can trust you with my thoughts. I don’t make friends easily, mainly because I’m painfully shy, but when I do I am fiercely loyal. I am the kind of girl who refuses to go to the movies unless I can get popcorn too. I would choose beer over wine any day of the week. I find solace in books, living a thousand lives through fictional characters. I am a hopeless romantic wrapped in the hard candy shell of a realist. I am an enduring optimist who will run over to refill your cup if it’s half empty. I’m a terrible liar. I smile even when I feel like crying. I do a lot of the wrong things for the right reasons, and occasionally stumble across the right things for all of the wrong reasons. I am an enigma, a world of contradictions wrapped up in a Harry Potter t-shirt. I am a girl who has found her happiness, even though she is completely clueless half of the time. I am a girl still figuring out who she is, and for tonight, that will be good enough. The key though? Learning to let others see what I have discovered on this adventure. No more hiding behind smiles and polite comments. Love me or hate me, I want people to know me.

I didn’t think this election season would ever end, but alas, here we are on that illustrious Tuesday that will determine the road we will take from here. Now, don’t worry, I’m not about to start pelting you with my political opinions and assail you with how ours might not align perfectly. We are all entitled to our individual opinions, and while we might be strongly opposed, we must respect one another’s right to maintain their respective stance.

I believe tonight’s election will be telling, though I am fearful. Partially fearful for the results, but more so for the reactions to these results. I have never seen our country as divided and charged as we were this year, and I will openly admit that I am worried how some will respond if their candidate is not chosen. After an election season that consisted of more mud slinging than general debate and more debasement than productive conversation, I can only hope that we will take these lessons we have learned and use them to better ourselves. It’s no secret that this election has been a royal mess- one played out on an international level. However, in spite of all of the name-calling and general embarrassment, one thing has happened: people have been forced to start those difficult conversations we have been avoiding. And while we might not like everything that has been said, it is a genuine step forward that the words have been spoken at all. Now we must take this momentum and use it to move forward. We must remember our compassion and find our respect again. We must remind ourselves that we have to come together if we ever want to make progress. We must remember that there is a time to speak and a time to listen.

No matter the outcome, I can only hope that we have learned something that will serve us well in the future. This is our country, these are our responsibilities. Cheers, my friends, may we find peace and progress in the coming months. (I know- a girl can dream).