Last night I got to check something new off of my bucket list: watch Neil deGrasse Tyson lecture live! For any of you belonging to the race of the nebula-searching, battle-bot watching, Bill Nye adoring geekdom- you are probably bouncing in your seat as you read this, filled with anticipatory excitement. Those of you who don’t get your kicks with astrophysics are probably hearing crickets right now and are tempted to click on to the next writer’s post. but here is why you shouldn’t: you will find the most rewarding of lessons in the most unexpected places. The spark that ignites your destiny could be hidden in the words written on this page- or maybe not. The only way to know: dive in, my friends.

Like I said: I’m a bit of a nerd, and, in spite of the career direction I chose, I have always had a soft spot for the sciences. Why else would I have paid a pretty penny to sit in a hot theater with a few hundred other people and listen to a lecture given by an astrophysicist on a Monday night? And, whats more: I had a phenominal time. Nerdy science humor, the man I have watched give countless speeches on YouTube, who narrated the Cosmos series (and guest starred on the Big Bang Theory), who can take a seemingly dry subject and tease it just enough so that even the novice is hanging off of every word. Shoot- he has even graced the pages of comic books! This is why I found myself in that auditorium, this is why I loved every minute of it, and this is why I’m writing about it right now.

The subject: An astrophysicist goes to the movies- what the movies got right and got wrong. From The Breakfast Club to super bowl beer commercials all the way to The Martian and Gravity. I laughed the entire time, and (gasp) I was learning as we went. Movies and science? Oh heck yes, I am on board, let’s get this train moving.

Now, I could go on and on about all of the different things that I learned, but lets face it- the entertainment value I can spin on this wont be nearly as spectacular. Instead, I’m going to flip this into something we could all learn from. You see, there was an underlying theme to his anecdotes: know your work. As a writer, my research is vitally important to all of my projects. Even through my fiction I delve deeply into the different facets of my subject matters. Vampire story? No problem- lets peruse the history of their myths. Zombies? How about a neuroscience book that explains the causes of the ‘symptoms’ the undead are faced with. Future dystopian society? Perhaps a few papers on political and scientific developments projected in the next century- yes, that ought to do the trick. I could make an exhaustive list here, but you get the point.

I am a bit ashamed to admit that I had never heard this quote until last night. But the moment Neil deGrasse Tyson quoted it, I could practically feel the electricity shooting through my brain to illuminate that lightbulb above my head. You see, the true mark of an artist is in the distorted truths. There is nothing more challenging than working within the parameters of the truth and finding a solution to your problems anyway.

Let’s take an example that was mentioned in the lecture. In the movie Gravity (this is not a major spoiler, but I warn you to proceed at your own risk if you still want to watch the movie). In the movie there is a scene where Sandra Bullock and George Cloony are out in space with a tether between the two of them. Sandra Bullock is about to run out of oxygen, but she wants to pull Goerge Cloony in. But he knows what the risks are, and in a sweepingly chivalrous gesture, he lets go of the tether and drifts out into space, effectively killing himself and forcing her to go back to the ship because she has no hope of getting him back.

From a creative and elemental standpoint: this is pure theatrical gold. But here’s the problem. In space there is no gravity, in zero G’s there are no opposing forces pulling them in different directions, no chaotic swinging of bodies. Out in space all she would have to do to reel him back in- gently tug on the tether and he would slowly float back to her, no harm, no foul. And if he decided to let go of the tether- it would simply just sit there, floating right in front of him because there are no forces pulling it in any particular direction.

So, I ask you, what is the greater challenge for a writer? To take the easy way out and wreak havoc in space? Or find another possible way to separate your two characters? As artists, aren’t we always looking for the next greatest challenge? (Side note: the rest of that movie is surprisingly accurate. In fact, the theory of one satellite going down and taking out dozens of others is a big enough fear that NASA has an entire office dedicated to the problem). (Side-side note: if you are looking for some good inspirations for a sci-fi story or art piece, do a search online about the ‘orbiting junk’ around the earth. There is a map that shows all of the satellites and other debris circling our world, and it is astounding. There are even potential issues of accessibility in our future- want to go to Mars? Well good luck dodging all of the ‘trash’ we have littering the orbital field of our planet). 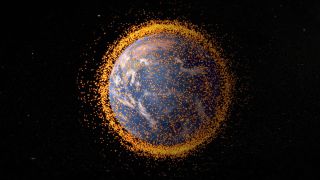 There is one other unavoidable risk you run when you choose to ignore the ‘rules’ of your world: alienation. Your readers (or viewers, as the case may be, depending on your chosen art form) come to your work with their own set of life experiences and knowledge. This cannot be ignored. For example, I work in the legal field, and when I am reading legal dramas or crime novels- I can give a fair amount of leeway for creative license. But sometimes the errors, intentional or not, become so glaring that they distract me from the real work. At times I have even gone so far as to put a book down because the inaccuracies were so blindingly brutal, I just couldn’t handle it anymore.

You see, my friends, we have so many potential fountains of knowledge at our disposal in our world now that we have no reason to ignore the facts. Take the time to learn something new- your craft and your audience will thank you for the extra effort. It is the difference between a mediocre work and something timeless. Respect the art. What do you have to lose? At the very least, you will avoid any potential factual call-outs on twitter from those who could have answered your questions all along.