Once upon a time in the land of the laptop, hidden in the obscure folders no one but the renowned author would ever dare visit, there lived the mysterious first draft. And what a horrendous creature he truly was. Stitched together with well-intentioned words and colored with a myriad of flourishing descriptions, he grew into something unrecognized by his creator. He face was pocked with plot holes, he was verbose with his descriptions, and minimal where it truly counted to make a point. His word choices were elementary and unrefined, he had more ‘buts’ than an ashtray and more ‘ands’ than this sentence. His grammar was tragically outdated, and his conclusory comments were rather anti-climactic. The average author would run in sudden fear at the sight of such a monster. But not this author, no. Much like Shrek, this author saw the potential buried under the grimy prose of the creature. This author was the Belle that would turn this beast into a beautiful prince.

Anyone who has tried to write a novel knows that the first draft is only the beginning, it is the tiny tip of the colossal iceberg. It’s not like in the movies where you sit down, you type and then in one fell swoop you have an instant best-seller with no need for revision. I tried to explain this once to someone who has been asking to read my work for a while now. I mentioned that I needed to do one more round of editing before the project would be ready. Their response, while well intentioned, was fairly misled. They believed that I had worked hard enough on the draft that someone should enjoy it. While it is true, I had put my blood, sweat and tears into the project- that was exactly why I didn’t want anyone to see it yet. When you work so hard on something, you want it to show, and often time the first draft does not reflect the work that went into it.

I have to constantly remind myself that the first draft is just the first stepping stone, the true heart of the work happens after the crude words are penned. I keep some quotes taped to my writing desk, right at eye level so that they are easily seen when I am ready to toss down the pen or close the laptop and walk away. They remind me to keep fighting for my goals, they propel me to give it just one more try. There are hundreds of quotes floating around out in the world that tell about the difficult struggle that is the first draft, leading me to believe that even the best writers feel the same pressures that the humble little no-name me feels too. These are just a few of my favorites: 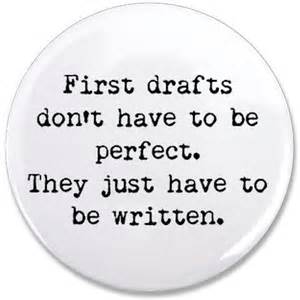 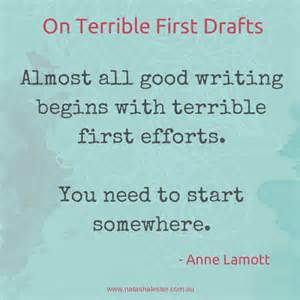 No one is going to see the first draft unless you decide that you want them to. Think of it like the solo runs, preparing you for the big race. Don’t take yourself so seriously, and don’t expect your work to glitter and shine at this stage. There will be parts that you write that will make you beam with pride at your own genius, and there will be parts that make you cringe and seriously contemplate burning it all. But in the end, the first draft is only the groundwork. 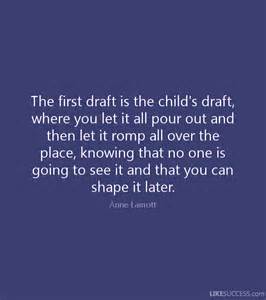 This draft is for you, to flesh out the story and figure out what it really is that you want to say. Personally, I usually go into my first draft with a particular idea in mind, but by the end I am starting to see a glint of something new shining through. It isn’t until I begin my revisions that I start to see what it is that had been hidden under all of my other thoughts and bubbling words. I find the heart of my work and start brushing all of the clutter away to make it shine. Tell yourself the story that you want to hear so that you will be ready to speak it to the world when the time comes.

Then again, if you prefer to be blunt… 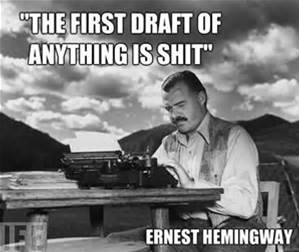 Oh Hemingway, never one to mince words. Perhaps you prefer the route of brutal honesty, if that is the case, then this is the quote for you. I have to say, to know that someone with such talent and success felt this way about his work- it gives me hope that perhaps I am not too far off the mark myself.

This next one is the one that I keep right in front of my eyes at my desk, it is my constant reminder of what I am actually doing…

Every time I write a first draft, I hate it- I can see the promise, but it is never the grad word I had hoped for it to become. I always have a vision in my head of what the story will look, sound and feel like. I begin my draft with the best of intentions, and yet my final product never matches what I had thought it would become. There is always a trace of it’s true potential underlying the mess I have made, a beautiful string that echoes the truth I had hoped to convey. That is the moment when it is time to wield the red pen with a vengeance, slicing through the muck and the grime to let the true promise shine through.

I can tell as I an writing that I am not doing my story justice. There are days when I feel like I should quit my current project, put in some more work practicing, and then come back when I feel like my skills are more on level with the caliber of story I want to write. Don’t fall into this trap. The first draft is not meant to be beautiful, it is not meant to be good. There may be people out there who think that writing is simply sitting at your keyboard, running through one draft and then shopping for a publisher- they have simply never bled over a keyboard the way that we do. Your work is like an iceberg. The first draft is just the tip that pops out of the water line; all of the editing is below the surface. A first draft is a warm up, the work out is in the editing. I could come up with a hundred other analogies, but I bet you get the picture.

Your first draft doesn’t have to be perfect- if that is what you are aiming for, you will never reach your goal. The first draft is meant to be ugly and messy. It is the bones of your story, to be molded and shaped later. It is simply a start. Don’t give up when the first draft is not what you envisioned. You are simply shoveling sand into a box so that later you can build castles. And what beautiful castles they will eventually be, if you are willing to take the time to sculpt them.